We all know that brand is not just a logo, but you have to admit a logo is still an important part. I see a lot of businesses change theirs as often as their cars…

So should you change yours? Here are 5 things to consider before you even start the process.

1. Why are you doing this?
Everything about marketing is building trust and familiarity with audiences. Is there a specific reason you think you need a new logo? For example you might think your business needs a refresh. My question to you would be, “would it be better to invest in things that better the customer experience?”. Unless the experience is dead set perfect, and I bet it isn’t, then the logo isn’t where your attention should be going.

2. Does the existing logo have context?
“Is this logo any good?” I’m often asked that question with the expectation of a ‘yes’ or ‘no’ answer. That’s impossible for me to answer properly, that question can’t be answered without knowing the context. To answer that with any level of expertise, we must first know how it needs to perform, who it needs to attract, the thoughts it needs to conjure and the values it needs to represent.

3. Better to evolve than change
The only time I’d recommend a business do a ‘complete rebrand’ is when it was in trouble. If the last owners had built a bad reputation (in which case I hope you didn’t pay for any goodwill), or if your product has become irrelevant and you’re keeping the bones of the business but essentially building a new one.

If your business is still relevant and you just want to stay on trend, adopt the Coca-Cola method of logo change, do it softly. In such a way that the brand mark is still familiar. The only time Coca-Cola changed their logo drastically was in 1985, and that became a year of either ‘branding legend’ or ‘attention grabbing conspiracy’. If your ears have just pricked up and you’re curious… watch the video ‘The 1985 Launch of New Coke’

4. Test it first
Don’t ask your friends what they think, ask potential and best current customers what they think. Friends don’t know the context and probably aren’t even users of your business. Remember a good logo must attract the people who will be your best customers.

5. Do the switch properly
Depending on how drastic the logo ‘evolution’ don’t have two logos out there in the market place at the same time. It’s just confusing – it creates clutter, the complete opposite of smart marketing. If you can’t afford to make a logo change and take it across your buildings, cars, business cards, stationery, website etc. then save a bit longer.

Related blog: ‘Your target customer is NOT everyone’

I once went to a Health Retreat in sunny old Queensland where I was learning about proactive health (cause and effect sort of stuff) and took the time to really think about “responsibility”.

I was in the gym and saw a cartoon on the wall with a trainer asking a chubby guy, “If you can’t find time to exercise an hour a day, how will you find time to be dead 24 hours a day?”

It dawned on me that many brand owners (either career driven individuals, sportspeople or business owners) don’t take responsibility for their own futures by preparing to beat today’s challenges.

In Tasmania, our famous discount retailer “Chickenfeed” closed down with financial difficulties recently. What shocked me (maybe shock isn’t the right word) were the number of people proclaiming on about how this was just another example of the economic downturn.

This is the same economy in which stores such as The Reject Shop and Shiploads (Chickenfeed’s two competitors in Tasmania) have now successfully opened more stores. If it’s the same economy and same trading conditions but one couldn’t stay afloat, then it must be safe to say the issue lies in the business, not everything around it. For many business owners or professionals the critical period is already here. Faster than ever businesses all around are becoming irrelevant and they’re living on borrowed time. They must choose if it will be a crisis to whinge over or a challenge to overcome. Let’s look at some scenarios and forgive me if it looks like I’m being a little ‘too’ blunt.

– If your competitors have the ‘next big thing’ and your customers love it so much they leave you…whose problem is that? It would be you that failed to get your own ‘Next big thing’.

– If your sales drop so you’ve discounted your products to a point you no longer make money…whose problem is that? It would be you that failed to provide or communicate enough value to maintain

– If internet shopping starts stealing your customers and you struggle to survive…whose problem is that? It would be you that failed to come up with an experience or element to your product that the internet couldn’t match, or that failed to take the opportunity to sell your unique product to the world also.

– If you’re a sportsperson who loses an endorsement because you drive your car like a maniac….whose problem is that? It would be you for driving the car without respect for the safety of others.

– Are you an automobile maker, that intentionally misled pollution screening at one of the world’s most trusted brands causing it to lose BILLIONS of dollars and impacting a countries entire reputation for trusted quality? Ok that last one couldn’t possibly ever happen could it Volkswagen?

Seriously though these points are just the tip of an iceberg – if you want to see other underlying problems for business see more in my eBook, it’s free and you can download it here.

I know the plight of forestry suppliers and many in agricultural businesses that have hit hard times and they find themselves in circumstances which are not caused by them. They, like all of us at some point in our lives, will have to ask themselves “Can we hold on to this and put the building block in to succeed, or should we start to diversify now whilst we are still strong enough to do so?”

At one point, in a respectable show of honesty, the CEO of Vodafone Australia admitted they totally underestimated the load on their network that would be needed to satisfy the appetite for smartphone usage amongst their customers. A couple of years ago a large exodus began because their network was hopeless. With all credit to the CEO, around the time he came out with the previous statement he openly admitted they knew it wasn’t up to scratch and would have to spend the next couple of years healing. Honesty is the best policy in business.

The buck stops with the individual. The reputation and ultimate success of our own brands rely on you. Consumers very rarely look positively at a ‘bail-out’ by someone else but instead respect strength and an enduring spirit. Blaming others for shortcomings is simply a waste of time.

Next time you or a friend find yourselves apportioning blame to others, take a moment to think what could have been done in the past to avoid this situation now. In this rapidly changing world choices need to be made for those in many industries. It’s always important to remember, you got yourself here, now it’s you who has the power to choose remain relevant and take the next step toward success. 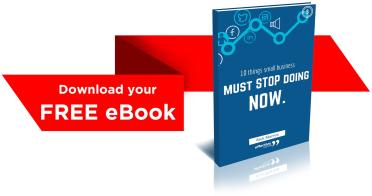